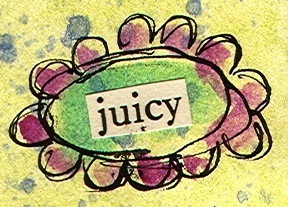 Isn't this a great word? I have high hopes for 2011 even though it's off to a pretty slow start. There's nothing juicy going on around here. We're basically in winter hibernation mode. Freezing our butts off. Trudging through rain, sleet, and snow. Shoveling. Scraping. Dreaming of brighter, warmer, longer days. 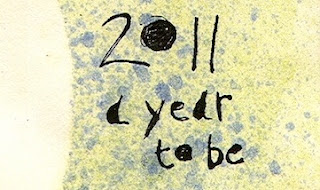 This is a little bit of doodling that I did in Pilgrim today as I was playing around with a dip pen and ink. I've never quite gotten the hang of using a dip pen properly but I like the scratchy messiness of it. I think I'll leave it out and keep practicing. 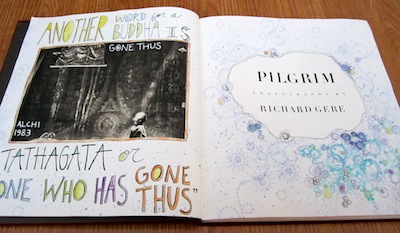 Pilgrim and I have been spending a lot of time together. We had lunch almost every day last week; not to mention a few quiet evenings at home. I feel like I'm making progress--and at the same time, I don't. Maybe it's because she's just so darn big. Each spread measures roughly 13 x 24 inches. Or maybe it's because I've spent a lot of time thinking, planning, and experimenting along the way. The first 7-8 spreads are in the works, meaning I've done something on each page. But I keep going back and adding a bit more color, a bit more stamping, a bit more layering. I added more to the pages above after I took the photo. 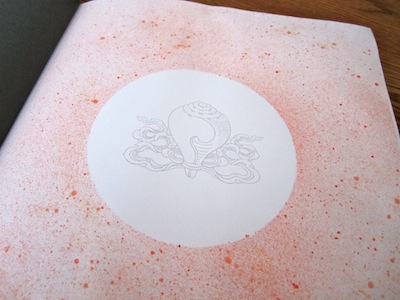 I wanted to have large areas of color and try some simple stenciling that would allow me to keep the text and photos intact. I played around with making my own "spray paint" using pigment ink refills that I've had around forever. I mixed the ink with water in small plastic spray bottles. The results are a little unpredictable--drippy and splotchy--but I don't mind. 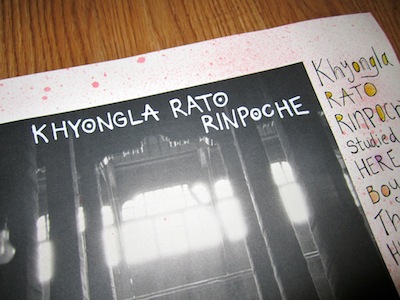 I recently bought a white "glaze" gel pen and decided to use it to write the title, place, and year on each photo. That pen is fabulous! It writes like a dream, is completely opaque, and raises up on the paper when dry. I like it so much I went back to the store and bought an entire set of colored ones which are transparent. 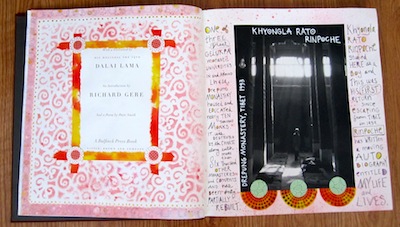 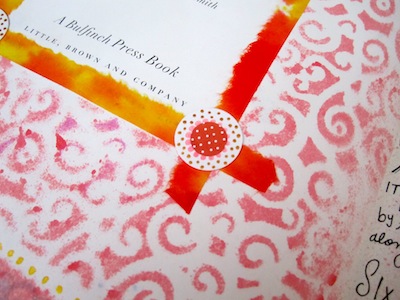 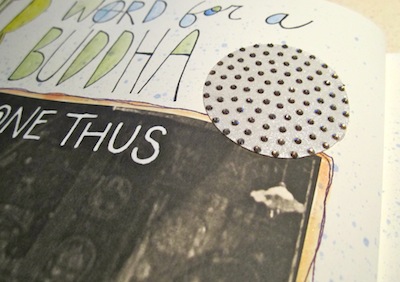 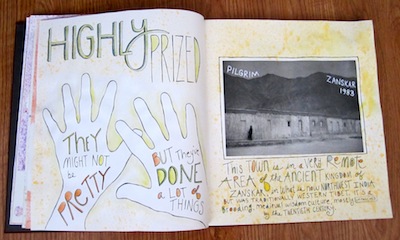 I still haven't done a whole lot with the January theme of "highly prized" although I've added a bit more to this spread since I showed it last. But I think that once I finish the beginning of the book where I'm working around the text, and have relatively empty pages (like this) to work with, I'll be able to focus more on the theme each month. 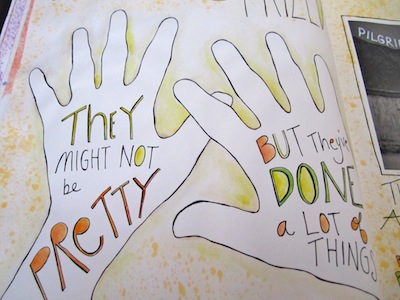 The best part about spending so much time together is that Pilgrim and I are really starting to bond. We're not quite in the "baring our souls" phase but we're definitely moving past the polite conversation phase. I feel pretty invested in this pilgrimage and really hope I can see it through to the end.
Posted by Pat at 7:14 PM 3 comments:

List It Tuesday - These Pretzels are Making Me Thirsty 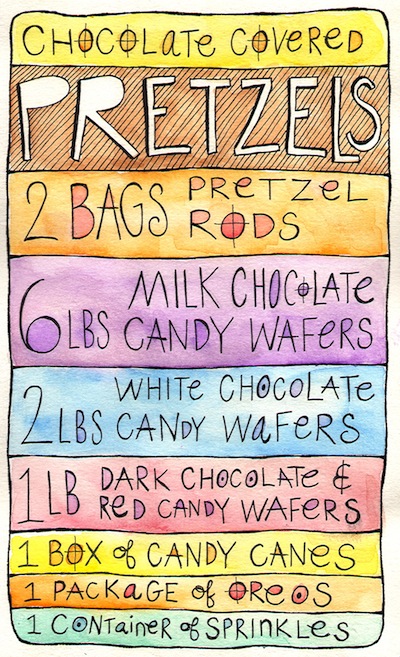 About ten years ago I gave up holiday baking and opted to make chocolate covered pretzels as gifts for family and friends. It took about three years to perfect my technique and experiment with different chocolate and topping combinations. Pretzel making has now become an anticipated holiday tradition, and I make some kick-ass chocolate covered pretzels! The problem is, I've never kept track of the ingredients that I use from one year to the next. Inevitably, I either have too little or too much. This year I finally decided to inventory my ingredients so next year I'll be prepared.

Head over to artsyville for more list love. Happy Tuesday!
Posted by Pat at 12:01 AM 9 comments:

The Sketchbook Challenge - A Beginning 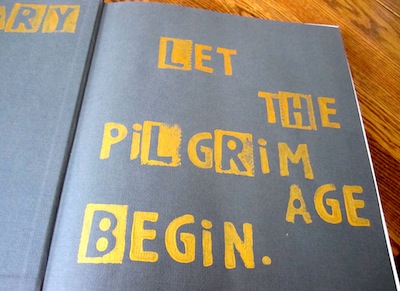 It's been about a week since I bought Pilgrim, the giant book I decided to alter for The Sketchbook Challenge. I haven't gotten very far in the altering, but I have spent a lot of time thinking about what I'd like to work on during this year-long challenge--one that I'm thinking of as my own personal pilgrimage. 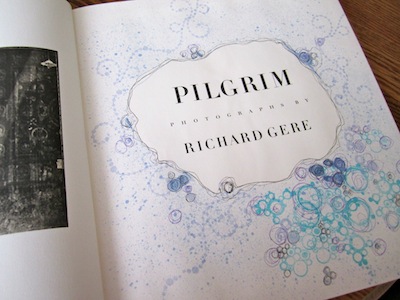 At first I thought I would gesso or paint over the text in the book and leave only the photos to incorporate into my sketchbook. Then I actually started to read the copy and realized how little I know about Tibet, the place where most of the photographs were shot by Richard Gere. Since the amount of text is pretty minimal, I decided to leave it intact and alter around it. This way, the final sketchbook will actually be two books in one. 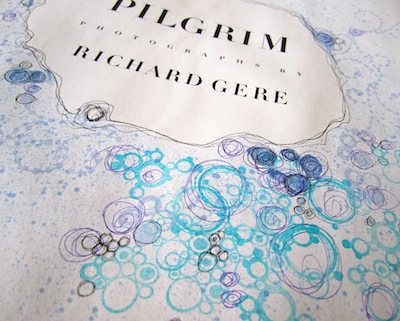 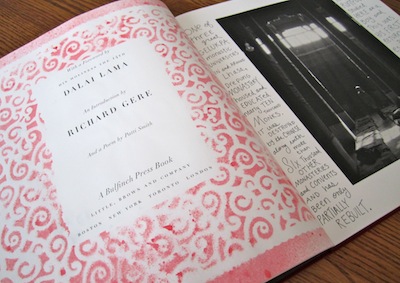 Each time I page through this book, I find myself flipping to the list of photographs and comments at the very end of the book. I want to find meaning in the photos. I want to understand them. My next decision was to re-write the comments from the back of the book onto each photo page. You can just barely see where I've done that on the right-hand page in the picture above. I decided to do this for a few reasons. First, I think it will help to integrate the original book with the sketchbook. Second, it will automatically fill up at least half the pages. After all, it's a BIG book!!! Third, I'll be able to work in the sketchbook during those times when my hands want to be busy but my mind wants to rest. (Pretty much every evening after work) I like to have tasks on hand that can be done even when the creative energy isn't flowing freely. 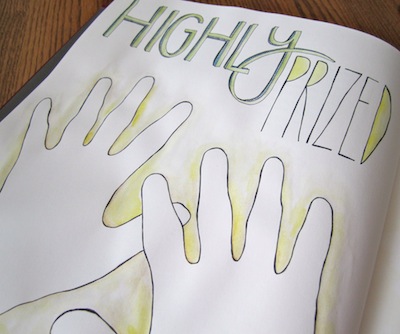 The Sketchbook Challenge theme for January is "highly prized" and I've just barely started sketching to the theme. So many things come to mind--it's hard to choose what to illustrate first. I plan to do more writing on this page about why my hands are important to me. Writing is one area I'd like to work on more this year as part of my pilgrimage.

I've never been a successful journaler because I've always had a problem committing words to paper in any kind of a journal. At first it was a matter of hating how my writing looked. I would almost immediately cover it up with paint or collage. I started to work on that phobia about two years ago in a journal that I called my Rejectamenta journal. It was much easier to write in a journal filled with garbage and to learn to live with it than in a pretty place . That exercise was the first step toward getting comfortable with my own handwriting. After that came the Aussie slang and Good Advice series of postcards that I made and mailed to my daughter at college. It was easy to practice lettering when it became a labor of love for someone special. And that's the key to getting better at anything...practice, practice, practice.

I can happily say that not only am I over my handwriting phobia, I now LOVE LOVE LOVE to play around with lettering. But not with my own words. I love other people's words and thoughts and ideas. That's why I enjoy lettering favorite quotes. So my goal this year will be to fill Pilgrim with my own words along with sketches and doodles. I've kicked my fears to the curb before, so I know I can do it again.

I'll probably add more color and doodles to these pages, but it's a start. Let the pilgrimage begin.
Posted by Pat at 12:04 AM 3 comments: 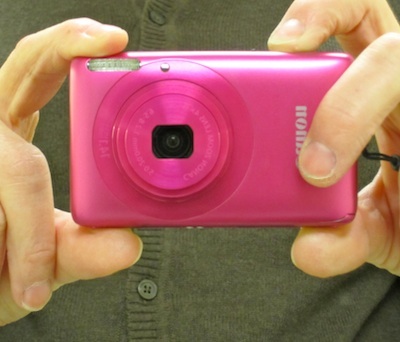 Some of you may recall the recent dilemma I faced trying to pick out a new point and shoot camera. The technical mumbo jumbo was making my head spin. I even asked readers for their input in this List It Tuesday post. (Thank you to everyone who responded!)  After much deliberation, I finally settled on the camera seen here--a Canon PowerShot SD1400 IS.

My decision was based on a combination of internet research, solicited advice, the help of a patient salesperson, a good sale price, and of course...sheer adorability! When I held this little pink beauty in my hands, it just felt right. It felt like the two of us could explore the world together and have fun doing it. You can read specifications and reviews until your brain explodes...in the end, you have to go with your gut and make the choice that simply feels right.

So far, I'm loving my little sidekick! The picture quality is much better than my old camera and she's just so darn cute! I can't wait to see what kind of adventure we get ourselves into!
Posted by Pat at 7:11 PM 3 comments:

The Question of the Day 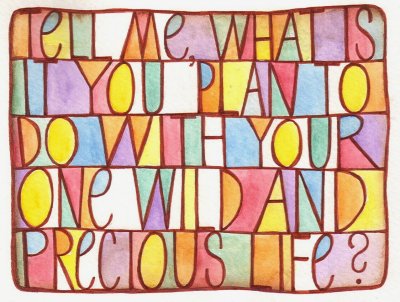 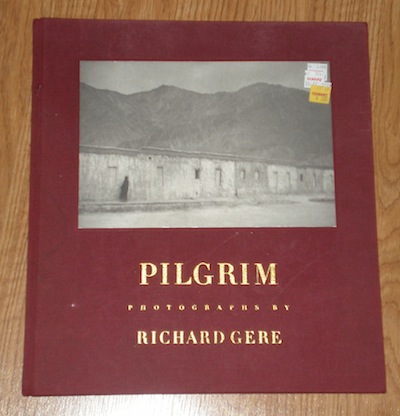 The dictionary definition of "pilgrim" is a person who journeys, especially a long distance, to some sacred place as an act of religious devotion. 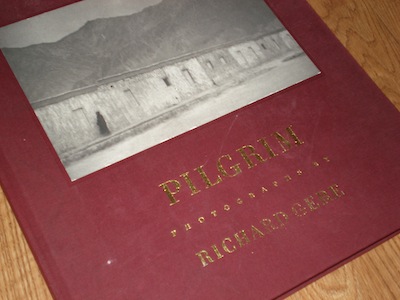 I wasn't originally planning to participate in The Sketchbook Challenge which you can read about here. But while browsing the bargain section at Half Price Books yesterday, I came across this prize--a giant volume of photographs taken by actor Richard Gere during his travels throughout India, Nepal, and Tibet. 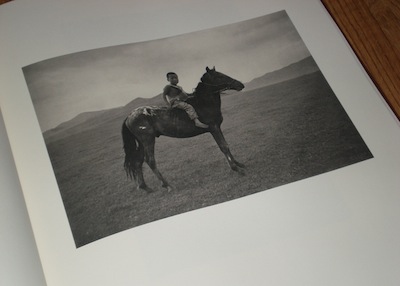 The book is huge--a whopping 12 x 13 inches--with a cloth cover and wonderful, thick, creamy paper inside.  But what I really love about it is that, with the exception of a few pages in the front and back, there is virtually no text, only pictures. One photo per page and glorious amounts of blank paper. The minute I saw it I thought it would make a great journal. That's when I decided I would participate in The Sketchbook Challenge after all. 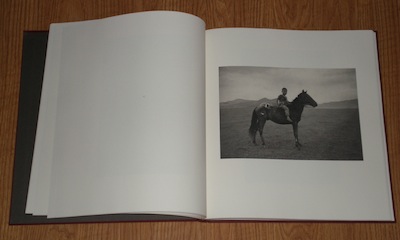 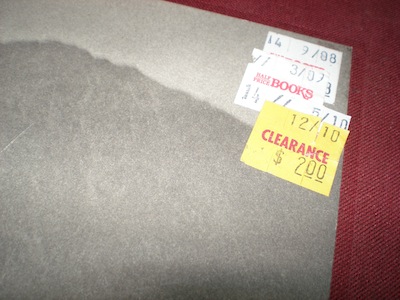 $2.00. Seriously??? This volume has been hanging around the bookstore since 2008 just waiting for someone to take it home and love it. I guess that person is me. I will become a pilgrim and The Sketchbook Challenge will be my long journey to a sacred place as an act of devotion. It's all very fitting, don't you think?

I have no idea what I will create on these pages, but I've done the math and filling 2.75 pages per week will lead to completely filling the book by the end of 2011. I'm not planning to keep myself on that deadline. Rather, I'm using that as my guide, or perhaps my goal.

The artists involved in The Sketchbook Challenge will provide a monthly theme to those who want to participate, and the theme for January is "Highly Prized." I need to go off and think about this. I hope you will join me on my pilgrimage and consider making one of your own by joining in on this challenge. There's no cost to participate and the commitment is as much or little as you care to make. A number of artists will be sharing their sketchbooks on the official blog, and you can link in or upload your photos to a dedicated Flickr site.

Welcome To My World

Pat
Join me on a journey of artistic adventures, experiments and inspiration. I've never met an art form I didn't like so here you'll find my attempts at everything from lettering to watercolor, sketching, journaling, altered books, collage, assemblage and more. I welcome your comments and feedback. Enjoy!

This is a Flickr badge showing public photos and videos from Pat Pitingolo. Make your own badge here. 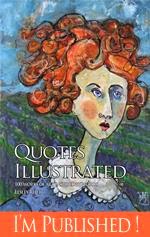 Please do not copy my original artwork or take images or content from this site without my permission. Feel free to link to this site. Thank you.